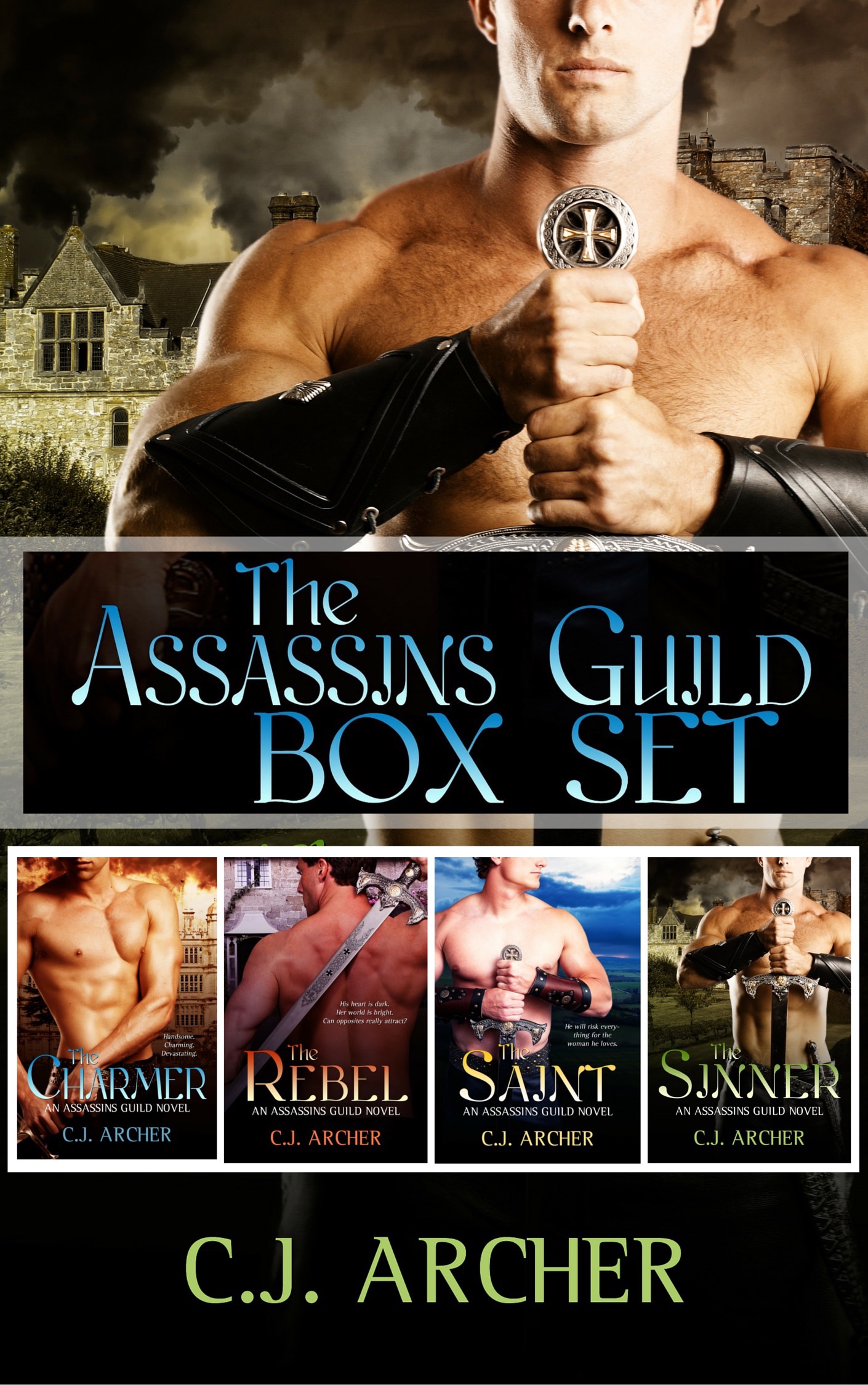 Get all 4 books in C.J. Archer’s ASSASSINS GUILD series in a single volume at one low price. Each book in this box set is available separately, but by buying them in this bundle, you’re getting a better deal! Contains THE CHARMER, THE REBEL, THE SAINT, THE SINNER.

THE CHARMER
Orlando Holt has never assassinated a woman before. The lovely, feisty Lady Lynden will be his first. She’s supposed to be a vicious murderess, but when Orlando begins to have doubts, he sets out to discover the identity of the person who hired him. What he learns will turn his world upside down, and propel him headlong into love with a woman who’s immune to his charms.

THE REBEL
Cole is a mystery, even to those closest to him in the Assassins Guild. All anyone really knows for sure is that he’s ruthless, grim, and cares little for his own life. So when he loses his memory during an attack and thinks himself a naive eighteen year-old again, no one can really believe the transformation. But as his memory returns, so do the nightmares and the dark reality of who he has become. When gentle-natured Lucy falls in love with the damaged stranger, she thinks him a smiling, amiable gentleman. But rumors of a murder in the nearby village have her suspecting that her patient may be hiding a terrible secret.

THE SAINT
Elizabeth Buckley has been in love with Edward Monk for most of her life. Unfortunately he’s only ever had eyes for her older, prettier sister. Five years after he left the village to make himself worthy of a Buckley, their lives intersect. This time, she’s determined to make him see her and bed her. All Edward has to do is convince the girl he loves to set aside her betrothed and wed him instead. When her betrothed becomes tangled in a web of lies and murder, it’s up to Edward to untangle him. If only he could keep his mind on the task, and not get distracted by the wrong Buckley girl.

THE SINNER
Guilt and desire battle within Hughe’s soul. When the enigmatic leader of the Assassin’s Guild learns that the widow of one of his targets is at the mercy of a cruel man, he does the only thing left in his power to do. He marries her. Then the worst thing happens. He falls in love with her. With more than one person trying to kill him and a family to rescue, Hughe needs the help of all his Assassins Guild friends to stay alive and keep his wife from learning the truth. Because he knows, and dreads, what will happen when she discovers what he did.