The 4 Scoundrels Box Set: A pirate, a spy, a mercenary & a rogue 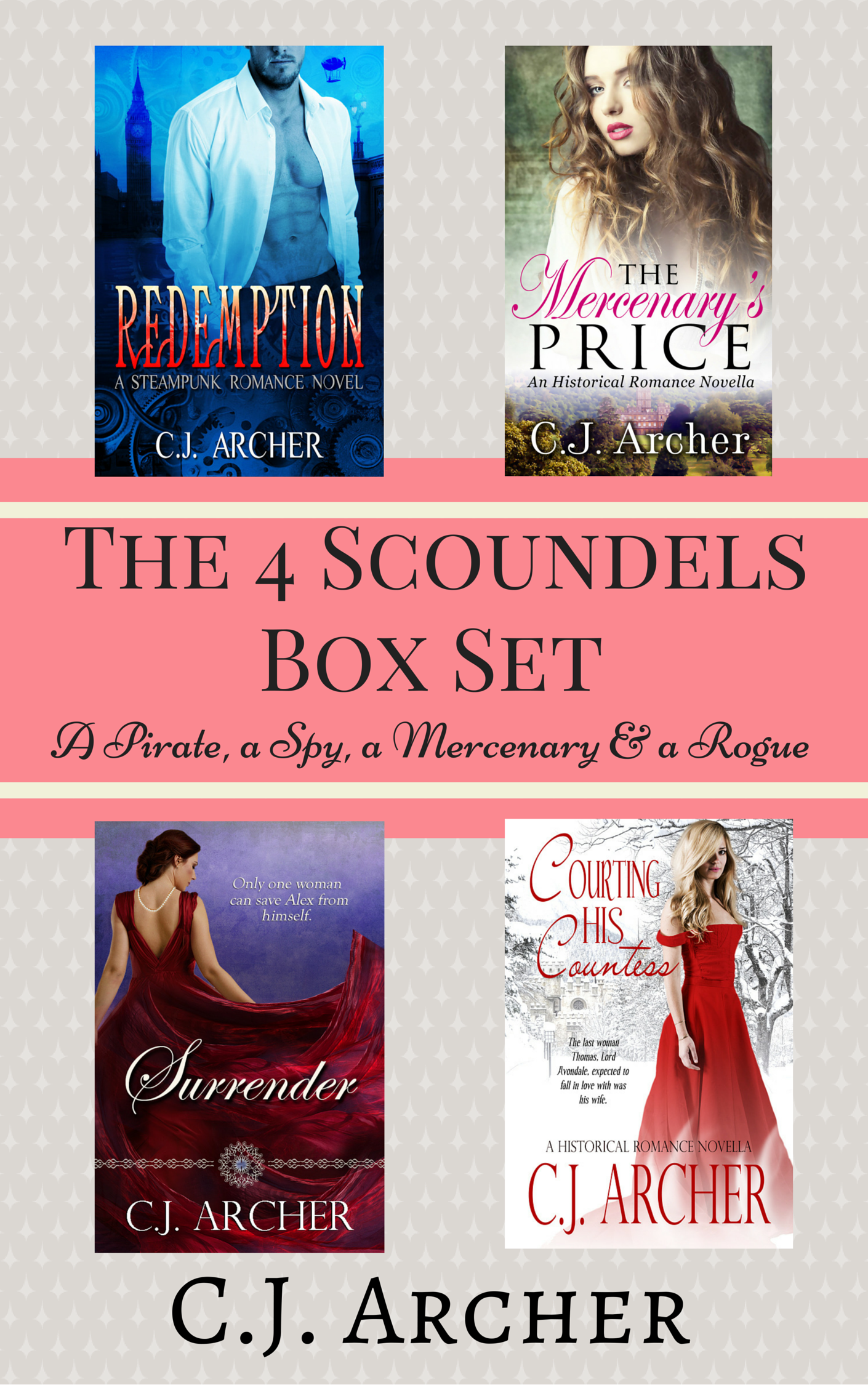 Get 4 historical romance stories in a single volume at one low price. Each book in this box set is available separately, but by buying them in this bundle, you’re getting a better deal!

SURRENDER: A Regency Romance Novel
Gentleman spy, Alexander Redcliff, murdered his colleague. It’s an event he can’t remember, except in his nightmares. Suppressing them is the only way to keep his sanity, but forgetting is no longer an option.

Only one woman can save Alex from himself.

Georgiana Appleby is a most unconventional lady. Prejudice shadows the physician and scandal is never far away. Forced to take Alex as her patient, she must not give into the rogue’s advances or she will risk losing her career and her heart.

Will Alex’s fierce longing for Georgiana be enough or will he surrender to the darkness inside?

THE MERCENARY’S PRICE: A Historical Romance Novella
Being a national treasure wouldn’t be such a curse if she only knew she could trust him.

Lady Eliza Harcourt, the queen’s seer, is in danger of being kidnapped. To avoid such a fate, she will be whisked to safety during a royal masked ball. But when the man doing the whisking turns out to be Thomas Blackstone, she’s no longer sure fleeing is a good idea.

Rejected by Eliza seven years earlier, Thomas has changed from the amiable second son of a lowly noble into a cold-hearted mercenary. Not only does she have to put up with the silent treatment, but she cannot be entirely certain he is on her side. The only thing she can be sure of is that he’s still bitter about the rejection. And that she still loves him.

REDEMPTION: A Historical Paranormal Romance Novel
In a world where inventors have all the power and anyone born with natural talents is feared, Tilda Upton must hide her skill at finding things from the authorities. But when a ruthless inventor discovers her ability, she’s forced to locate a secret weapon for him or be put to death. The only man who can help her is Black Jack Knight – sky pirate, vagabond, killer. But Jack does not like passengers on his airship, especially women whose vast talents are just beginning to be discovered. And especially women who get under his skin.

Together they fight corsairs, a mad inventor and their growing attraction to each other in order to retrieve the invention Tilda has been forced to find, only to learn it could destroy her.

COURTING HIS COUNTESS: A Historical Romance Novella
The last woman Thomas, Lord Avondale, expected to fall in love with was the wife he betrayed and abandoned six years ago. When Rose doesn’t accept his apology, however, he loses all hope of a happy future together. Yet he’s thankful she has agreed to come to his bed to beget an heir.

Known as the Ice Maiden at Queen Elizabeth I’s court, Rose has been trying to forget the man she once loved–a love she thought destroyed after he spent their wedding night with his mistress. Withstanding Thomas’s charms, however, is proving more difficult than she expected.

Can she forgive the ultimate betrayal?

Can he ever atone for what he did?