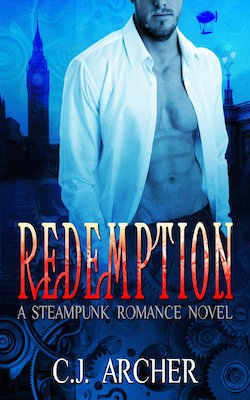 Not appropriate for readers under the age of 18.

Tilda Upton’s talent at finding things with the aid of a talisman puts her on the edge of the dangerous hellhag category. Rather inexperienced in using her magic, she’s prone to mistakes. It is one such mistake that lands her in debt to the Chief Royal Inventor who blackmails her into retrieving an Oriental and his machine. But to find the Oriental she needs to intercept an airship and the best way to do that is through piracy.

Tilda turns to the notorious Black Jack Knight, a sky pirate known for his cruelty and cleverness who dislikes passengers, particularly of the female variety. Fortunately for Tilda he accepts a currency she can provide—the location of a man who witnessed his brother’s murder, a murder which Jack was falsely accused of committing. Together they fight corsairs, a mad inventor and their growing attraction to each other in order to retrieve the man Tilda has been forced to find, only to learn his machine could destroy her.

Previously titled The Adventures Of Miss Upton And The Sky Pirate.