Homes of the Rich and Famous (Characters)

The houses inhabited by the characters in my Lord Hawkesbury’s Players books were mostly modeled on real places. It makes it easier for me to describe them and I’m all for making things easier.

For Blakewell House, I used the location of a real London house which no longer exists, called The Herber or Erber.  Once a royal residence, it was said to be very grand, grander than the one above.  It has a rich history having been owned by various famous names including Ralph Neville, Earl of Westmoreland, the “kingmaker” Earl of Warwick, Richard of Gloucester (made infamous by Shakespeare), a Lord Mayor of London, and Sir Francis Drake the old sea-dog himself.  I thought it fitting to have my pirate/privateer hero live in the same place as Drake.

Lord Hawkesbury’s mansion on The Strand looked like all the other mansions, palaces and castles on this wealthy thoroughfare, namely palatial.  I modeled it loosely on Somerset House: 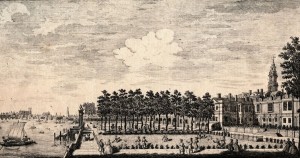 Above: the garden at Somerset House fronting the River Thames. 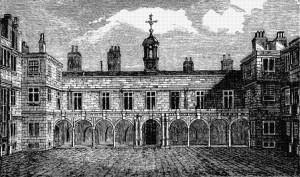 Above: The courtyard of Somerset House

It’s sad that most of these places no longer exist except in old drawings, and our imaginations of course.