Alongside the rise in popularity of intellectual pursuits came an increased interest in witchcraft in the Elizabethan period.  Many learned people believed witches existed and must be dealt with.  This led to the passing of the Witchcraft Act in 1563 which stated those found guilty of  invoking or conjuring evil spirits and using witchcraft to kill would face the death penalty. 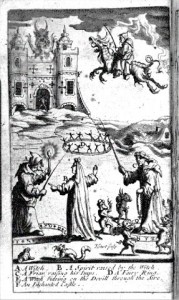 Since someone had to be blamed for plagues, poor harvests and frequent deaths, witches were the obvious choice.  And since women (and elderly ones at that) had few rights and little education, they were the easy option and took the brunt of the accusations.  Of 270 witch trials, 247 were women.

Queen Elizabeth was more lenient towards witches than her Spanish and French counterparts.  Perhaps this is because her mother, Anne Boleyn, had been accused of witchcraft by her enemies.  Under the 1563 Act, witches were to be executed by hanging, not burning at the stake like in many mainland European countries.  Torture was not allowed during the investigation.  How generous.

The county of Essex seemed to be a hot-bed for witches with a large number of trials occurring there.  It also had its own witch hunter – a Justice of the Peace, Brian D’Arcy, who searched for witches in and around the village of St. Osyth.

His job would have been made easier for him by neighbours or family members who often made accusations against a woman they had reason to dislike. 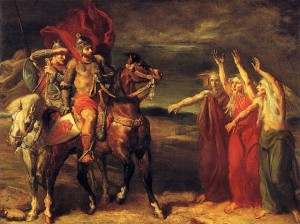 To get rid of witches, Simon Forman, physician and astrologer, suggested the smock or shirt belonging to the witch be burnt and soaked in their urine.

There seems to be a few interesting ways of warding off witches and other unwanted beings or diseases.  Superstition was rife and people were willing to try anything.

For example, a piece of unicorn’s horn set in a ring could protect against poison.  I bet this concoction was made up by some unscrupulous apothecary who just happened to have a unicorn’s horn lying about.

Many superstitions were attached to the medical profession as evidenced by the number of physicians who were also magicians or astrologers. Many herbal remedies that can cure ailments can also be useful for anything from keeping spirits at bay to increasing sexual prowess.

For example, caraway is an ingredient in love potions but it also had the useful function of stopping mischievous spirits and thieves from entering your house. Now THAT must have been a best-selling potion!